I have a story if you are interested.  My own history lesson and confession I guess. You might ask what this has to do with birth and breastfeeding– and I would tell you that right now – pretty much everything. The population I serve has dramatically increased the numbers of women of color and multiple newer cultural and marginal communities of which I have yet to become familiar.

I have been in this professional arena since I was 19 years old. I am now 65. Back in the 70’s I was taught by my nurse colleagues and doctors as I learned how to care for the mother thruout labor, the birth process and the eventual journey into motherhood. I was so bubbly, energetic happy and LOVED the magic moment of birth. I began to focus on the physiology of what went on just before and right after birth. I looked at women and babies. I learned everything available to me to improve my care for them. I was focused on research.

I was still living and working in the same small rural town in which I grew up. My  graduating class of some 200 had a handful of black kids- one was homecoming queen and one went on to play professional football. These were my friends. My classmates. I wasn’t real pretty, fit, athletic or rich. I was quite poor from a big family on a farm with open doors for any kid in trouble to stay as long as that kid’s family knew they were safe. My parents were like hippies and my dad would grow marijuana and hang crops in the barn to dry. My sisters friends would steal it. Not my friends. Not me. I was a nurse. I helped people. I strived to make things in my field increasingly competent, however, I did not yet know I was privileged.

At the hospital they taught me in the early 70’s how to document a woman’s race. There were 3 options. White, Black and Other. We used these options on the baby’s ID sheet, delivery log book and the birth certificate. I had learned early in anthropology class that there were 3 different classification of the human skull. Caucasoid, Negroid, and Mongoloid. I hope I remember correctly from so long ago. I don’t even know when exactly or if this is still true or taught today. I was taught that you write what you see. I was taught the baby would always be the same race as the mother.
“Skulls as I learned them in 1972”

I did not yet know I was privileged.

This had been the extent of my education on race. I was extremely open minded and accepting of all people I encountered from all the populations to which I was soon exposed.  I helped them labor, birth, breastfeed and welcome a new family member. I helped my colleagues accept a woman’s right to informed choice and decision making for HER birth. At some point I became aware of cultural competency and prided myself on learning new ideas and supporting the mother’s choices as they themselves viewed them. I helped place many things into practice which were evidence-based care. I helped and educated colleagues accept the changes in obstetrical /neonatal  care as they emerged. I was as culturally competent as I could be. I didn’t think of myself as racist. I did not yet know I was privileged.

In the 80’s Michael Jackson and Lionel Richie and others wrote the “We are the World” song and singers united for a production to raise money for African Ethiopian communities – TV shows, MTV and others brought more awareness. It was inspiring and this was a huge uplifting experience through which to live. I loved the world and everyone in it. I didn’t feel racist or privileged. I felt part of a global community. 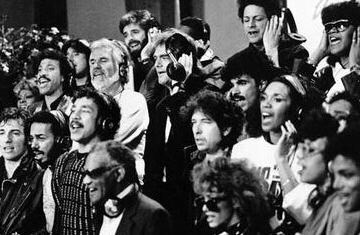 We are the World Singers

One time in the early 90’s we had a trans-man on our unit who sadly needed a hysterectomy for cancer. This was my first trans exposure in my professional career so I scoured all available journal articles to educate myself. I tried to help my colleagues be more open and accepting as some had a hard time. I just didn’t understand their point of view. I enjoyed caring for this man and learned so much from him. I certainly didn’t feel better than him, I did not yet know I was privileged.

Then the internet happened. We were thrust into a new world. The information age exploded at our fingertips. Researching evidenced-based care in my field became an obsession. I became an instructor/mentor/preceptor in many aspects of my field striving for the best. Not long after this, social media emerged which became wildly popular. I started to open my mind further and really listen to the conversations. I really paid attention.

Then I was confused. I hadn’t understood what the Black Lives Matter movement meant and thought ???- all lives matter!!! Why is this happening.  I confess. That is what I thought at first. I then read something somewhere  late at night that opened my eyes.
I had been wrong.

The women of color and of different religions and marginalized groups/ communities may be or are experiencing far more oppression in life than I could ever understand and now are just having a baby and learning to breastfeed. They are or could be facing walls and roadblocks everywhere that I didn’t even know existed. I need to know what they need from me to help them reach their personal birth and breastfeeding goals.

If I have this correct, and I think I do, I have been racist by not understanding what my fellow humans are experiencing. I have unearned privilege being born white cis female and heterosexual.

I now accept that I am privileged.

I need to continue to learn and do better.

I’m only with a mom and baby dyad for a brief time. I may have a single interaction with them which may or may not impact them in their eventual breastfeeding relationship. All or any attitudes aside- we need to roll up our sleeves and work together. But I need to check my privilege at the door before I even meet them.

Then I can begin.

If you wish to learn more about your own journey, Cynthia Mojab has excellent info in her article. Pandora’s Box Is Already Open.

Tags: Breastfeeding, race, white privilege, woc, women of color
From: My 35 cents
← Breastfeeding- Yeah- It’s Not Exact or Precise
Are you afraid to Exclusively Breastfeed? Educate yourself!!! →
One Comment Post a comment