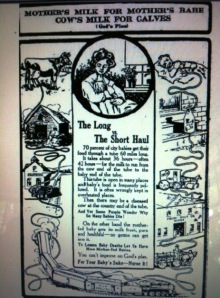 This is a part of my comment reply placed to an individual who had commented on The Feminist Breeder’s  post “When It Comes to Breastfeeding, We Can’t Handle the Truth”

“There were countless situations over the last 200 years which forced caregivers (whether the natural mother or another individual)to resort to artificial feeding of one kind or another. It is amazing what some of them came up with to try to feed those infants! Necessity was the mother of invention. And many were able to survive. It’s wonderful that they could. Many more, however, sadly died. Many many babies were sickly or died in those times.
You say: “The matter is that formula/breastmilk substitutes became so helpful that people continued for centuries to make it work.” I agree.
But my take on it is that the necessity of an available safe artificial alternative to breastfeeding for those mothers who could not breastfeed their babies took centuries to formulate…to make it nutritious enough and safe enough and to come up with a safe enough feeding container. It was just that.. an artificial substitute.
Gosh– I am NOT an expert on this aspect at all.
I just feel that the heart of this conversation is that artificial infant feeding has risks. Risks that mothers aren’t informed about because society has normalized artificial feeding. Breastfeeding is normal feeding.
No one should ever take away an individual’s choice..EVER…!!!!!
Mother’s simply need better information to make INFORMED choices.
I’m very sensitive and careful in my approach to moms… helping them with information they need to make the best choice for them. Then I will ALWAYS support that mother 100%.
Here’s an interesting historical perspective link for your review from the American Journal of Public Health | December 2003, Vol 93, No. 12
It covers history from about 1890 to early 1900’s.”

“Low Breastfeeding Rates and Public Health in the United States”

Here are some quotes and excerpts from this article published in the American Journal of Public Health (December 2003, Vol 93, No. 12 ) discussing Public Health THEN and NOW.

“Today’s medical community recognizes what their
predecessors knew a century ago—that the
American propensity to shun human milk is
a public health problem and should
be exposed as such.”

Abstract: “The medical community has orchestrated breastfeeding campaigns in response to low breastfeeding rates twice in US history.
The first campaigns occurred in the early 20th century after reformers
linked diarrhea, which caused the majority of infant deaths, to the use of cows’ milk as an infant food.
Today, given studies showing that numerous diseases and conditions can be prevented or limited in severity by prolonged breastfeeding, a practice shunned by most American mothers, the medical community is again inaugurating efforts to endorse breastfeeding as a preventive health measure.
This article describes infant feeding practices and resulting public health campaigns in the early 20th and 21st centuries and finds lessons in the original campaigns for the promoters of breastfeeding today.”

I found this article to be very informative and very interesting.

WHAT HAVE WE LEARNED???